A common trouble point that many people come across when developing a PHP application is deploying their changes automatically to a web server. In fact, it doesn't need to be complicated, GitHub Actions is a CI/CD platform that can be used freely by anyone with a GitHub account (within certain limits). Here's an example of how to build an application with Composer and a Gulp task and deploy it to a remote server. However, if your application is more simple, you can always remove a few steps.

GitHub Actions are configured using a YAML file in your repository. In this file, you can create jobs with a certain number of steps. In fact, there are many pre-made jobs available on the GitHub Marketplace, these can be combined to create a pipeline.

First of all, it goes without saying, but the code must be hosted on GitHub for this to work. Once that's taken care of, start by creating a file using the following directory structure in your project, either via your local machine or the web interface :

We're using main as the name of our workflow, but it could be anything you want. It can be created easily by clicking on the "Actions" tab and selecting a blank workflow. In this example, we're going to be creating a couple of jobs with multiple steps: one to build and one to deploy. The first step of our pipeline is to tell it when to run. In our case, we want it to run whenever there is a commit or push on the main branch.

However, with such a structure, we must exercise branch discipline to prevent a work in progress build from being deployed:

When changes are ready to be deployed, the develop branch can be merged into the main branch.

The first part of the file contains the name of the pipeline as well as the trigger condition. In this case, it will run when a commit is made on the main branch.

The following configuration is used to create our build job. Here are a few notable properties:

If you use a task runner such as Gulp to automate building your static assets such as compiling SCSS, minifying JS or optimising images. This job is a good place to run it. Adding the following steps to the build job will provide a Node environment, install the required packages and run a npm script.

In the last step, you can run any npm script defined in your package.json file. If required, add NODE_ENV: production to the environment.

The last part of the process is to deploy our built application to a web server. We're going to use the rsync utility, which is a tool that allows you to synchronise a local directory and a remote directory. It will create missing files, update changed files and delete removed files for us.

This job uses the needs property, so it depends on the build job. Firstly, we download the previously uploaded artifact from the previous job and subsequently upload it to our web server root. Indeed, on a typical Apache/NGINX server, the virtual host root will be located in /var/www/ 1.

In our case, we're using an SSH private key rather than a password. You can check the rsync deployment repo for more options.

Notice that some values are stored in the secrets variable, these are configured in the repository settings.

Navigate to your repository settings, the Secrets section and the Actions menu to edit the secrets. 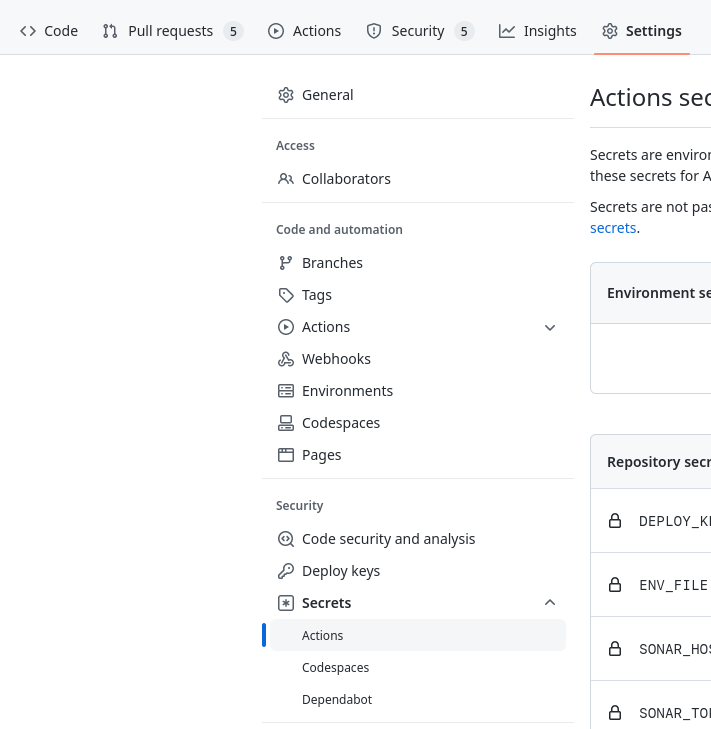 Using the "New repository secret", you can create a new secret variable. 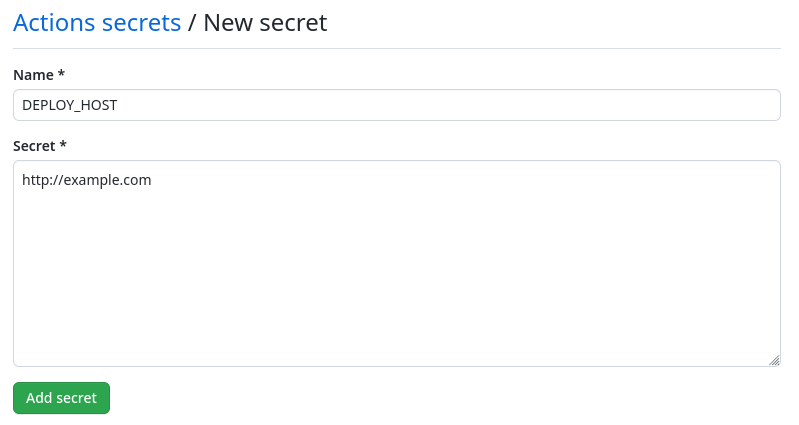 In this example, you will need to create the following secrets:

Now, when a commit is pushed to the main branch, the pipeline will run. You can view the result from the "Actions" tab.

The preceding screenshot, shows the two jobs that ran and produced a single artifact. Once completed, the server is up-to-date with the latest changes.

Where to go from here¶

GitHub Actions is a very flexible CI/CD platform, and there are many improvements that could be made to this example. Here are a few ideas:

The possibilities are endless, all depends on what you aim to achieve with your application.